Google may be the dominant search engine that still clings onto power, but Bing is still widely used. Could your business benefit from advertising on Microsoft’s Bing?

If you are a B2B business, then Bing may be a useful platform to be found on. While many people may use Chrome or Safari in their spare time on their home laptop, tablet, smartphone or otherwise – it’s more likely they use Internet Explorer or Edge on their work computers. And they may not have chosen to opt for a different search engine.

We wouldn’t advise anyone to ditch AdWords for Bing entirely – but there is a case for using Bing in conjunction with AdWords. If you aren’t reaching a certain percentage of your audience on Google, then your next best bet is on Bing. You could keep going, but this is often enough.

Take a look at the search engine market share for the UK below: You can see that Google dominates with over 90% of the search engine market share. But that’s 10% of searchers not using Google. And if your audience is more inclined to be using something other than Google, then that’s a good reason to give it a try. Bing comes in at 6.71% for the UK, which may not seem like a lot, but that’s still a lot of searching taking place where your brand isn’t being found.

Consider the following graphic presented by Bing back in August 2017: 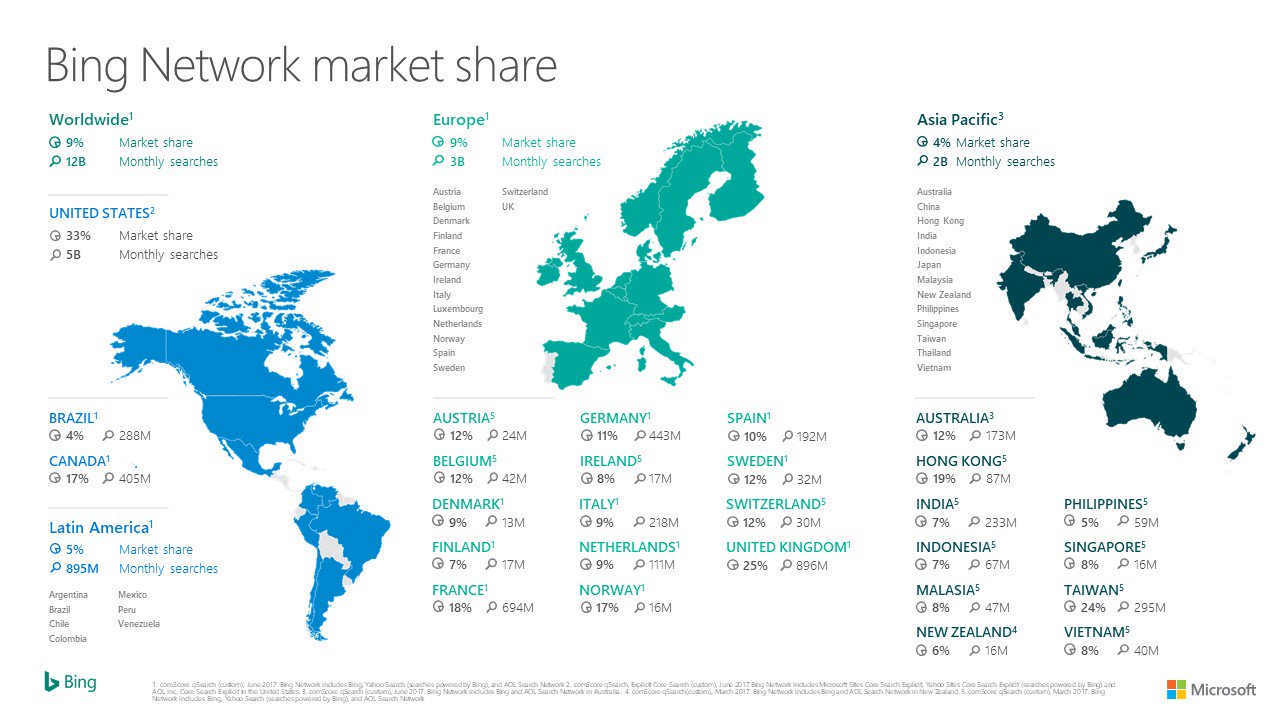 While it’s right to be sceptical of Bing’s own analysis, it’s still worth considering. They claim to be getting 3 billion monthly searches in Europe, with 5 billion in the US, accounting for 12 billion worldwide each month.

So how do they compare? What are the pros and cons of each of the platforms? Well, there’s a few things to consider.

What’s worth noting is that in essence, both platforms are similar. And a good reason behind that is simply down to Bing copying what Google has done on AdWords. So much so, that it’s simple to get going on Bing purely because you can import over your AdWords campaigns directly. That’s how similar it all is.

Fewer brands are advertising on Bing. Which means if you have a few direct competitors on Google AdWords, it’s best to get out of the gates and beat them to it on Bing. If you’re the only brand advertising on Bing, not only does it give you an advantage in your niche, you’re far more likely to capture additional revenue you’d otherwise have lost.

Bing is significantly cheaper. You will be spending a fraction of what you would spend on AdWords, purely because of less competition.

As this is less cost-per-click, if you can find a consistent audience, this can produce a better return on ad spend. So while Bing may not have the volume of searches Google can boast of, it can be better in terms of performance. You can run the same campaigns, and spend less on each click. On average, it’s found that Bing’s average cost-per-click is 1/3 cheaper than Google’s.Why wouldn’t you try it out?

Bing allows you to set preferences for gender and choose age ranges for all ads. Google does not allow this. While it may not be a very 21st-century thing to advertise based on gender, it still has a time and a place. And of course, there are many reasons to hone in on particular age ranges. Google allows you to do so on video and display, but not for search listings. Bing even allows you to increase bid adjustments for specific groups, allowing you greater control over how you target niche crowds.

So if Bing offers these benefits, why aren’t more people advertising on it?

The main crux of it is that most people are using Google. It has 90% of the market share in the UK. Many brands may find it a waste of money to put effort into Bing, and instead hone their AdWords campaigns. How many customers have you had tell you they found you on Bing rather than through Google? But still, you could be leaving money on the table by not at least replicating your key campaigns on Bing.

AdWords remains the market leader, and offers a wider reach that helps to broaden your branding and gain more conversions than anywhere else. There’s a reason it costs more than Bing, and it’s gotten to the point where if your business isn’t advertising on AdWords, you’d best have a good reason not to be. As your competitors will almost definitely be taking advantage of this. Google is the first place people start the bulk of their purchasing research, and so if you aren’t found there, you could be missing out.

And at the end of the day, advertising on Bing is another distraction to running your business. You need to put time and effort into optimising your adverts. While what works on Google should logically transfer if you’ve honed your AdWords campaign, there’s obviously going to be differences you will likely need to iron out.

Before leaping into advertising on Bing, consider your audience. If they are of an older generation, or largely at work, it could work very well. And older audiences may have more to spend. If they’re tech-savvy, perhaps not so well. But there are still people who choose to use Bing. Perhaps people who don’t use Android smartphones. Perhaps they have a Microsoft Surface instead of an iPad. Perhaps they just like using Bing (it’s not unheard of). The only way to find out if it will work for your business is to give it a try, and with such cheap cost-per-clicks, you won’t have much to lose. Especially if you are already on AdWords and can replicate a few campaigns.  AdWords is a time-consuming task for many businesses, and Bing ads is a superb opportunity for businesses willing to give new things a go.

If you need a hand in setting up or managing your Bing advertising, or your Google AdWords campaigns, get in touch with the team at Xanthos. We have deep expertise in PPC advertising, and can help you get the best possible results from your advertising campaigns. We relish the opportunity to help businesses grow.